If you can’t stand the pressure… ask your mother to stop pointing the gun at your head.

Steven is a writer, by all accounts of self-proclamation. But no artist can be expected to work under serious pressure, especially not when the pressure consists of his own mother indenting his tender skull with the muzzle of the pistol held in her hand.

Suddenly, it’s write or die for Steven. He better tap away on that typewriter or expect to be extracted from the land of the living before he’s had the opportunity to finish anything he’s ever written. Not to mention that his recently departed Father lying on the floor beside him should supply enough motivation.

When Steven manages to frustrate his murderous mother to no end, his wish made under duress actually comes true. Mother’s vanished… along with all evidence of the foregoing incident ever having taken place.

Is his beloved father really dead? Is his own mother now a criminal on the run? Can he truly never cure his lifetime disease of writer’s block?

Only one person can uncover the truth and set the world to rights again. That would be Tim, Steven’s much more successful, though younger, brother. If only Tim would actually believe Steven’s retelling of the frightful situation he’s just managed to survive.

Someone’s got to fix the latest family faux pas. And everyone in the family knows it can’t be Steven.

In the dead of night, two brothers battle sibling rivalry, serious mother issues, one heinous surprise after another, and a lifetime of family strife to get to the bottom of it all and uncover what’s been lying beneath all along. 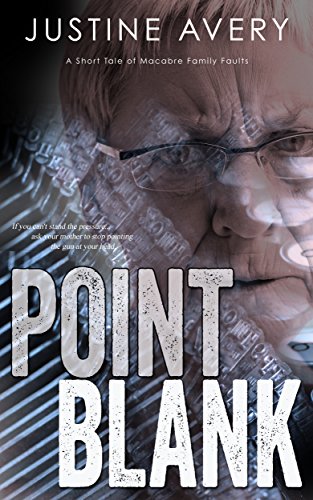 Point Blank: A Short Tale of Macabre Family Faults is a short story murder mystery written by Justine Avery. Michael never realized that she was this insane, though she had terrorized him his whole life. Now, with the gun pressing down into his skull, he could smell his mother’s fetid breath as… Read full review
Jack Magnus for Readers’ Favorite

Reviews from Goodreads.com
Return to books

the photography of Vadim Trunov