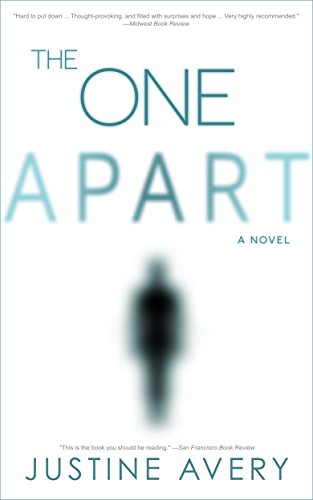 A metaphysical blend of story and truth as one individual considers how his actions will affect the world. A book that will stay with readers long after they put it down, an excellent piece of literature.

A perfect blend of realism, fantasy and deep spirituality awaits those who open Justine Avery’s novel, The One Apart. It is what readers bring to the novel – faiths, belief systems, philosophical dilemmas – that will influence and shape their perceptions of this fascinating and compelling read. Avery’s book, like life, is full of instruction for those who want to be fully aware.

This is certainly the case for the main character, Aaron, a remarkable boy who lives with his mother, Sancha, and his grandmother, Maria. Although she’d planned to give Aaron up for adoption, Sancha bonds so deeply with her son at birth that she can’t fathom life without him. His grandmother realizes his uniqueness, too, as the newborn communicates with her through blinking his eyes. He makes astonishing progress through developmental milestones, walking and reading within the first months of life.

As a toddler, he speaks with the wisdom of a timeless soul. Maria suspects that these physical and mental feats indicate that her grandson is chosen for a special purpose, but she hopes he’ll live as normal a life as possible. He’s distracted, however, by a malevolence that only he can see. As Aaron comes of age, he strives to act normal and blend in, but his very few close friends and girlfriend notice his preoccupation, his never being fully present in this world.

There’s a reason for Aaron’s constant distraction, for his never feeling a part of this life; he is connected to “the Apart,” the other-worldly dimension that is both removed from human existence, “corporeality,” but ever at hand. Since childhood, he has sensed that his true name is Tres and that his existence as Aaron is somewhat play-acting. His hyper-awareness alerts him to his “OnLooker,” a sort of guardian angel who’s a liaison between Aaron and the sagacious luminary beings of the Apart that consult and advise on Aaron’s tutelage.

Much of the book involves Aaron learning, with the instruction of his OnLooker, how to fully experience awareness, to understand that every moment is this moment despite previous lives and the variety of life’s experiences. At a critical juncture in the novel, Aaron is given a choice, one that will impact his own existence dramatically but also that of all other beings. The author adroitly merges Aaron’s worldly existence and his relation to the realm of the Apart in a poignant and satisfying conclusion to the novel.

This is a quiet book, one that allows the reader the time and space to experience life with its main characters. The stillness is at times deeply peaceful, at other times eerie and ominous. The novel illustrates the power of compassion and empathy, but also the chilling consequences when power is exercised for self-serving purposes.

While the character of Aaron has similarities to various religious and mythic figures, the author has also imbued him with a uniqueness and a relevance to our times. This book will stay with you long after you finish it, a hallmark of excellent literature. Justine Avery’s The One Apart inspires deep contemplation of self, community, and individual and collective purpose.